This article is a stub. You can help Seven Little Monsters Wiki by expanding it. 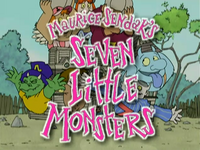 Write the text of your article here!

3. The Mystery of the Missing Five

4. Seven Monsters and a Baby

8. A Day at the Firehouse

13. The Adventures of Super Three

3. All's Quiet on the Monster Front/Nightmare on Chestnut Street

10. I'm Telling/Voyage to the Bottom of the Cereal Box

12. My Favorite Crustacean/Pennies for Seven

14.  And Baby Makes Eight/These Are Your Lives!

* The Season Three episodes may not be in order due to the fact that when the episodes first debuted they would only show one story despite the fact that Season Three episodes consisted of two stories. This is because at this time Seven Little Monsters is with The Berenstain Bears. Seven Little Monsters is in PBS Kids Bookworm Bunch. Here is a list of the combined episodes for this block. Later the episodes were put back together to make full half hour shows, as a result many episodes consist of shows that are do not have consecutive numbers. The number by each story shows the order that it first appeared in. Some of these pairings are estimations and may not be accurate.

Joanne Vannicola as One

Retrieved from "https://7littlemonsters.fandom.com/wiki/Seven_Little_Monsters?oldid=7169"
Community content is available under CC-BY-SA unless otherwise noted.